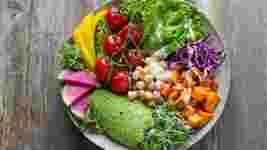 In their 2020 review, experts from the EAT Foundation analysed the health and environmental implications of adopting national food based dietary guidelines (FBDG) for 85 countries plus two sets of global sustainable dietary guidelines: the EAT-Lancet Planetary Health Diet and the World Health Organization recommendations.

The researchers initially compared current intakes to the various recommendations from national and global dietary guidelines. They then modelled the impact of adherence to each of the dietary guidelines and compared to six policy-led health and environmental targets, including: mortality from chronic diseases, greenhouse gas emissions (GHGe), freshwater use, cropland use, and fertilizer application.

Additionally, the EAT-Lancet Planetary Health Diet recommends increased intakes of legumes, wholegrains, nuts and seeds and decreased consumption of all animal-based foods, with the exception of fish and poultry. The WHO dietary guidelines also recommend an increase in wholegrains and reduction in processed meat consumption, compared to current global intakes.

The researchers estimated the health and environmental impacts that could be achieved if populations adhered to dietary guidelines. They observed:

The EAT Foundation is calling national health authorities to update their national dietary guidelines taking health and environmental benefits into account. Limiting the consumption of animal-derived foods, in particular beef and dairy, has the greatest potential for increasing the environmental sustainability of dietary guidelines. Increasing the intake of whole grains, fruits, vegetables, nuts, seeds, and legumes, while reducing the intake of red and processed meat, and attaining balanced energy intake were associated with most of the health benefits.

They concluded that national guidelines could be both healthier and more sustainable if they were closer to the EAT Planetary Health diet which is a predominantly plant-based diet.

The healthiness and sustainability of national and global food based dietary guidelines: modelling study