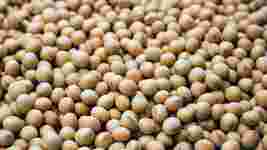 Hypertension is a key risk factors for cardiovascular disease (CVD), one of the most prevalent non-communicable diseases worldwide. Lifestyle and dietary factors play a big role in prevention and treatment of hypertension and CVD. Plant-based diets such as the DASH diet have been shown to significantly lower blood pressure.

One of the beneficial elements of plant-based diets is the replacement of animal-based proteins with plant-based proteins, such as soya. Observational studies have shown soya protein consumption to be beneficial in the treatment of hypertension. However, clinical trials have had mixed results. This study aimed to clarify the impact of soya consumption on blood pressure via a systematic review and meta-analysis of randomised clinical trials carried out up to June 2020.

A total of 15 randomised controlled studies from Asia, Europe and USA were included in the review. Studies included interventions of varying lengths including consumption of soya foods, soya proteins or soya isoflavones. The majority of studies were based on post-menopausal women with mild hypertension but some studies also included male participants. Study populations were varied including healthy participants and those with high cholesterol or high blood sugar.

A random-effects model was applied to pool mean difference in blood pressure before and after interventions with soya foods, weighted based on the study sample size. Publication bias was assessed. A 95% confidence interval was used throughout to assess significance and a sensitivity analysis was carried out.

The meta-analysis demonstrated that:

Overall, the quality of the studies was good with a low risk of publication bias. Sensitivity analysis indicated that no one study overly influenced the results.

The researchers concluded that soya consumption is associated with a mild but significant blood pressure lowering effect in adults.

Including soya foods as part of an overall cardioprotective diet can help to further lower one of the biggest modifiable risk factor to CVD – blood pressure.