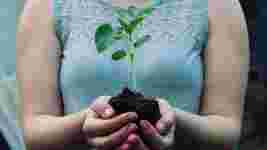 Our current food system has a huge environmental impact. Over the last 50 years, we have seen a transition in global food production which has reduced hunger and poverty but at the same time placed pressure on the eco-systems we rely on.

The environmental impact of our food system is expected to continue to rise due to:(1)

One of the ways our food system impacts the environment is through greenhouse gas emissions (GHGe). These include substances such as carbon dioxide (CO2), methane (CH4) and nitrous oxide (N2O) which, when released into the atmosphere, contribute to global warming. The food system is estimated to contribute 34% of all manmade GHGe.

The International Panel on Climate Change (IPCC) states that we need to act urgently in order to prevent global warming increasing past 1.5°C above pre-industrial levels.(2) The Paris agreement, an international treaty signed in 2015, sets out global commitments to tackling climate change which includes significant changes to the way we produce food.(3)

Clearing of forest and other natural landscapes for agricultural land releases stored carbon dioxide into the atmosphere and we also lose the precious carbon sink capacity of the land (the ability to absorb and remove carbon from the atmosphere).

GHGe also arise from other parts of the food supply chain including transport, processing, storage, retail and consumption. The FAO estimates that a third of food intended for human consumption is wasted, equivalent to annual GHGe of 4.4 GtCO2eq.(8)

Our World in Data(9) produced the following chart showing GHGe across the supply chain for various foods, based on data by researchers Poore and Nemecek (2018).(6) It is clear that animal-based foods, in particular red meat and cheese have much higher emissions that plant-based foods including soya milk, pulses and grains. 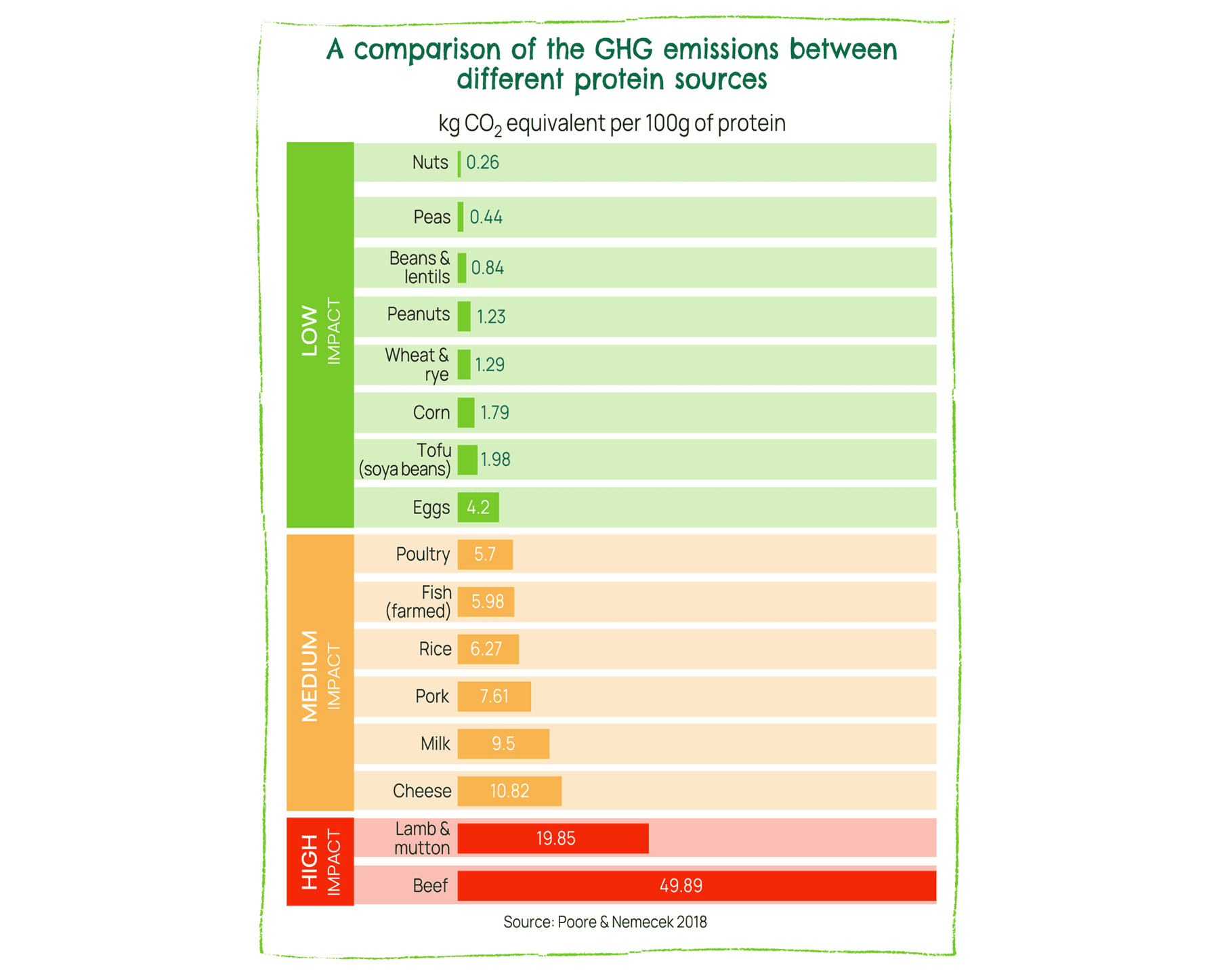 As animal agriculture is responsible for over half of the food system GHGe, shifting towards a more plant-based dietary pattern will play a key role in minimising climate change and preventing environmental degradation.

For example, the current global food system is responsible for: 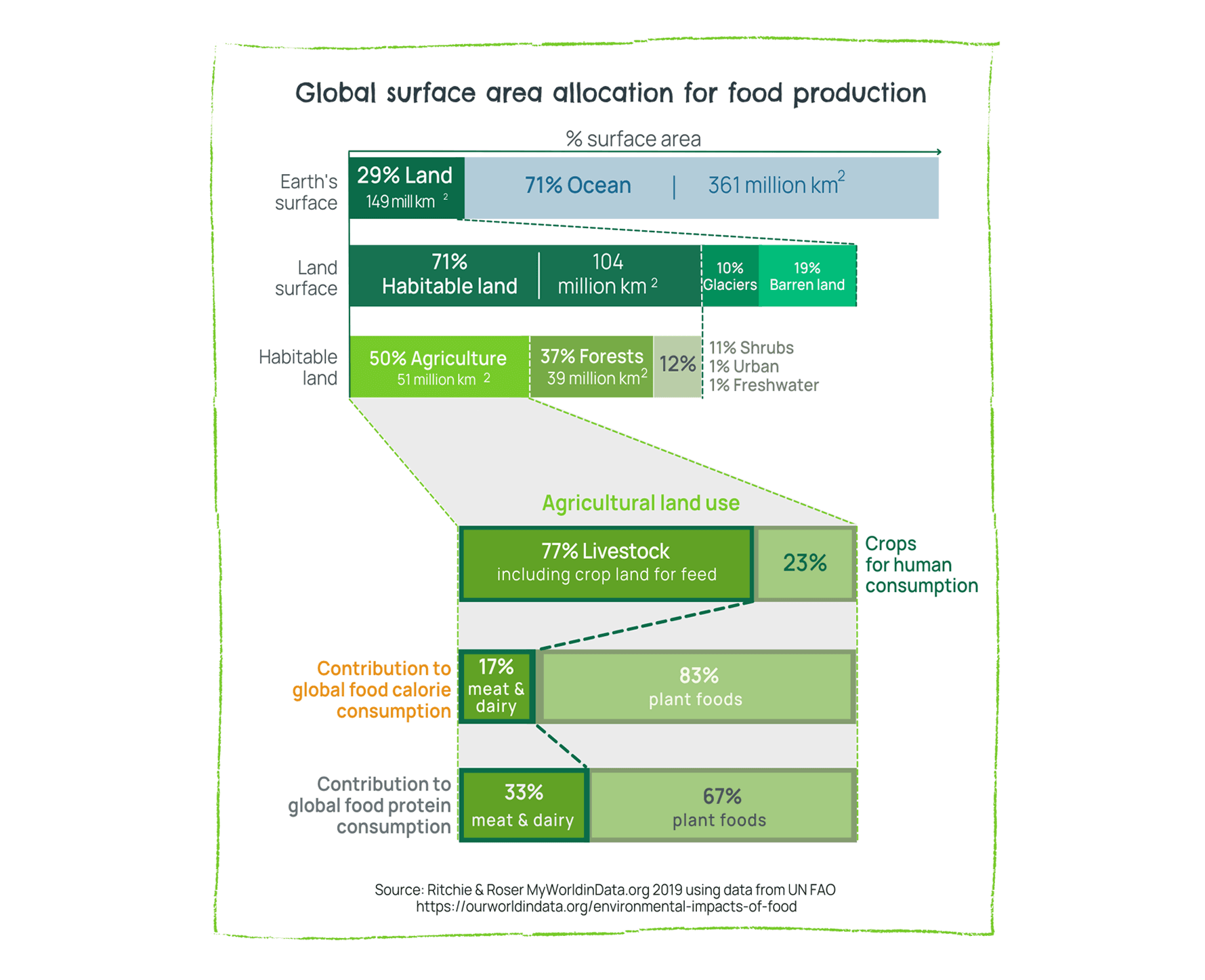 Two systematic reviews assessing the environmental impact of vegan, vegetarian and omnivorous dietary patterns concluded that, in general, the higher proportion of plant-based foods in the diet, the lower the environmental footprint.(7,13) A 70% reduction in GHGe and land use as well as 20% reduction in water footprint could be possible with a shift to more sustainable dietary patterns.(13)

It is clear that plant-based diets which reduce consumption of meat and dairy, have a lower environmental impact in terms of GHGe, land and water footprints.(13) 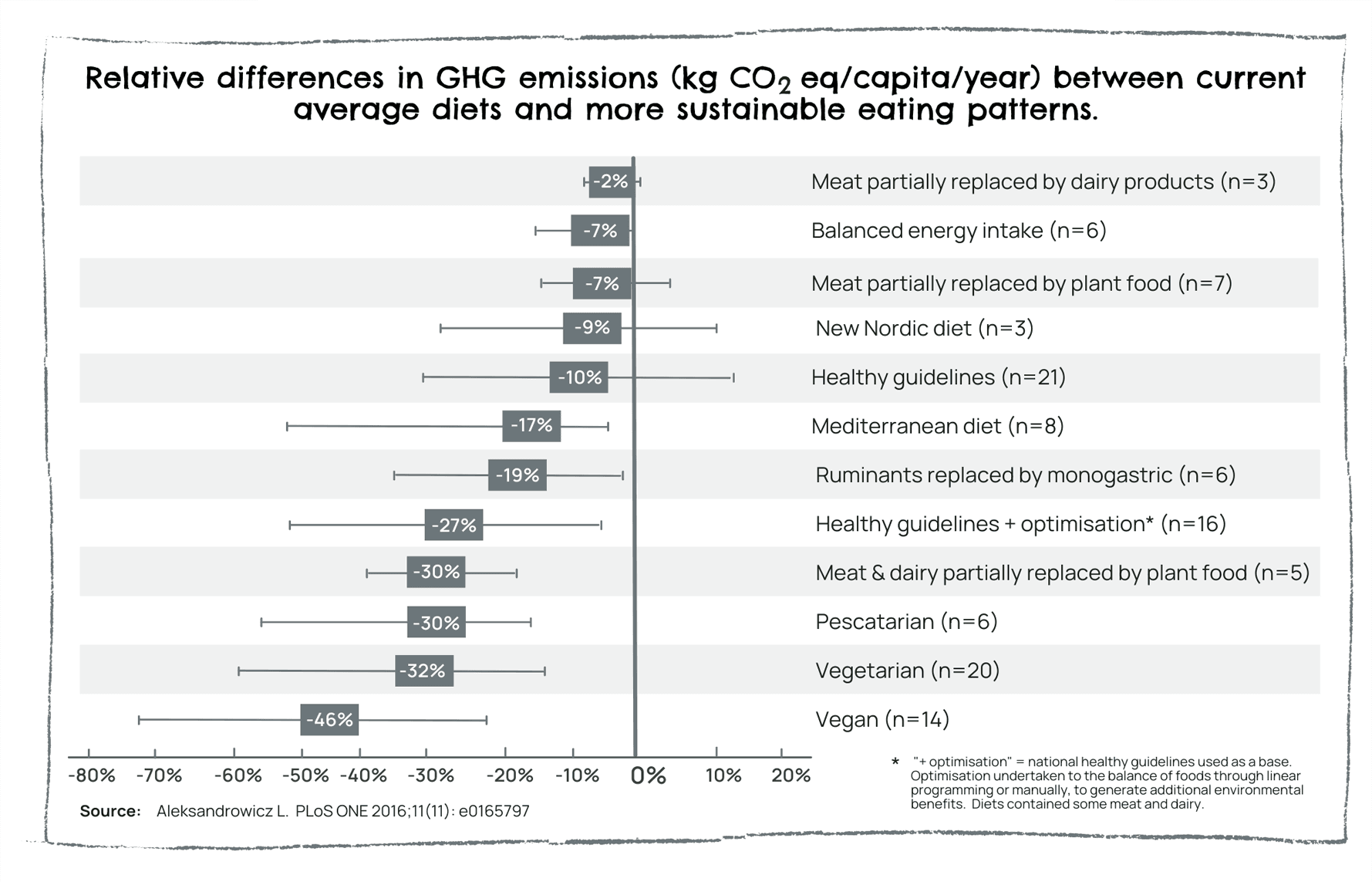 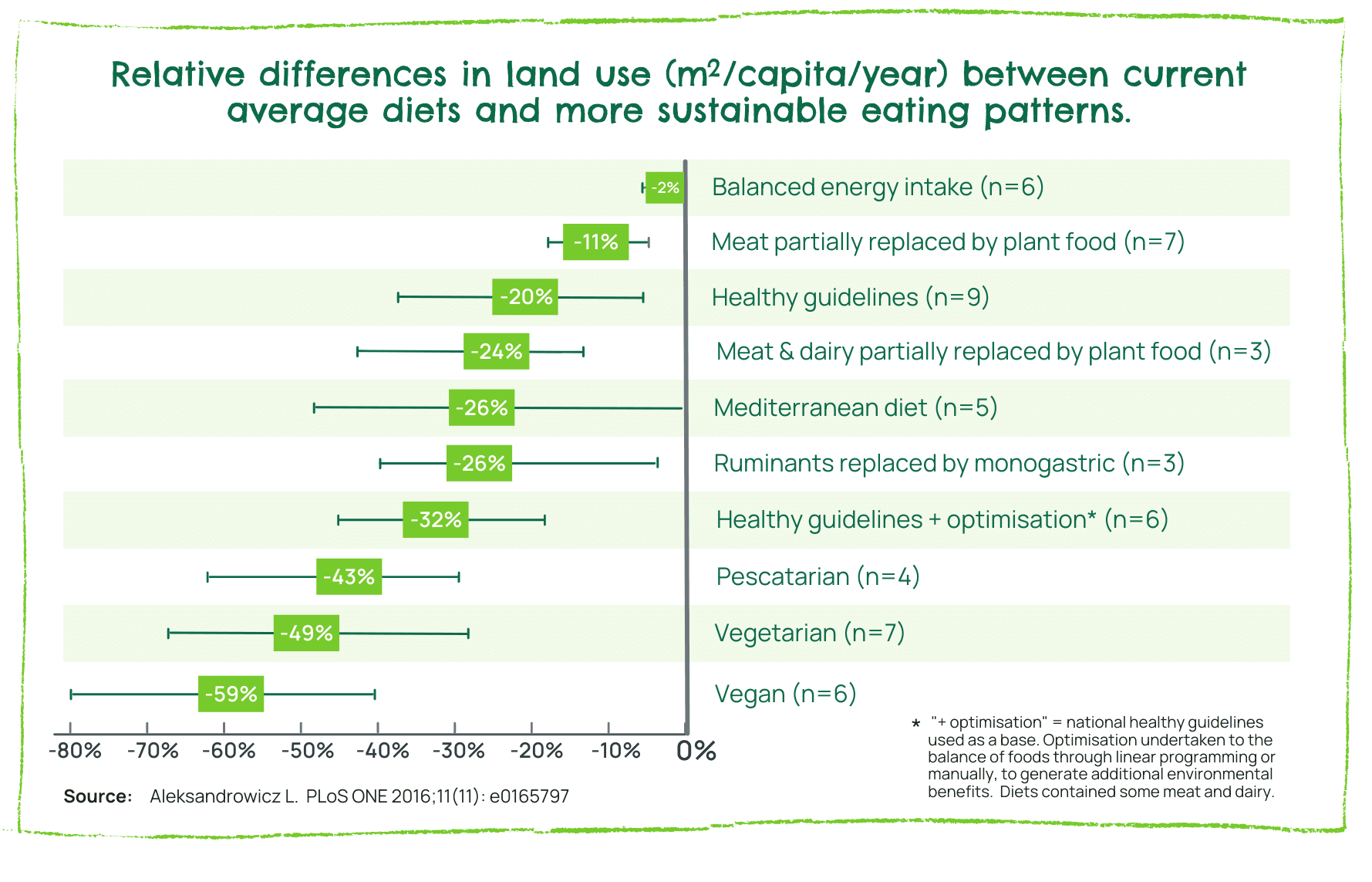 Is a plant-based sustainable diet a vegan diet?

In one study, a 5% reduction in meat intake (based on % of energy intake) was associated with 10% and 14% lower carbon and land footprint, respectively.(11) Similar findings were observed in a 2020 study, which assessed the environmental footprints of Italian diets. The authors concluded that adherence to healthier, more plant-based diets (such as the Mediterranean diet) is associated with a lower environmental footprint, compared to a standard, omnivorous diet.(14)

Modelling studies have also demonstrated that it is possible to reduce dietary GHGe by up to 40% with realistic dietary changes such as decreasing meat intake (without omitting it from the diet), consuming more plant-based foods in the diet and reducing food waste.(14,15) 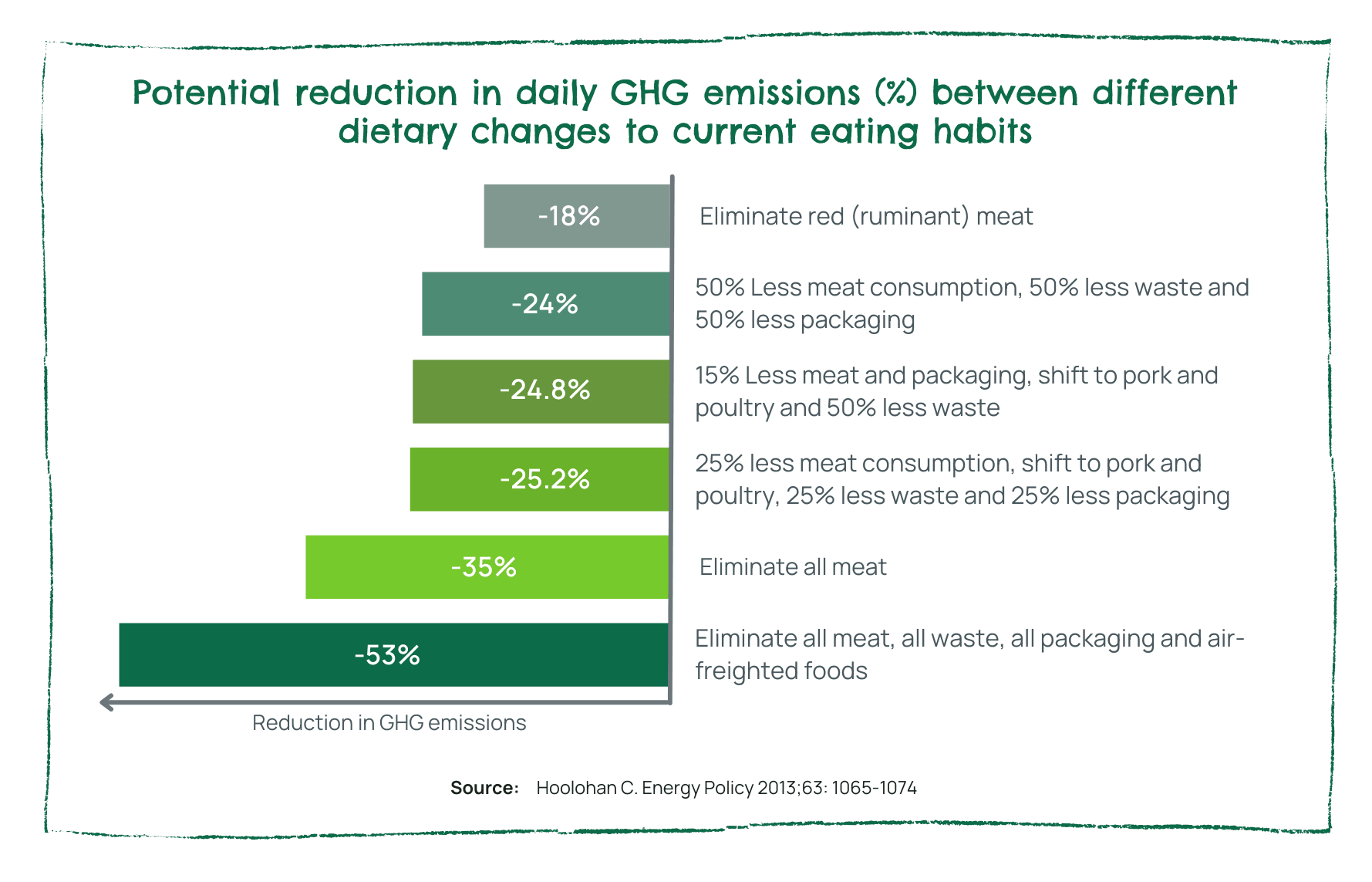 The impact of land-use change for agriculture

In addition to the potential GHGe reduction associated with a shift towards plant-based diets, attempts have also been made to calculate the potential for CO2 sequestration on land that is currently used for animal agriculture and feed crop production. In 2020, Dr Matthew Hayek and team from New York University, modelled the impacts of three dietary scenarios:(16)

The dietary scenario based on current trends resulted in emission of 85 GtCO2 as a result of increased land- use for animal agriculture. Both the EAT-Lancet diet and the vegan diet scenarios resulted carbon sequestration of 337 and 547 GtCO2 respectively via restoration of natural grassland and forests, equivalent to 99–163% of the CO2 emissions budget.

According to current research, a plant-based diet with lower amounts of animal-based foods is consistently associated with a lower environmental footprint. Diets which reduce, but do not necessarily exclude, animal-based proteins such as national food-based dietary guidelines, offer environmental benefits including reduced dietary GHGe and lower land and water footprints.