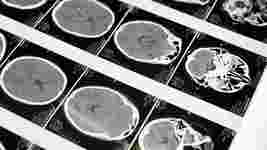 Age related health conditions such as impaired cognitive function and cardiovascular disease (CVD) are amongst the most prevalent conditions globally. Effective interventions are therefore needed to reduce the disease burden.

Plant-based diets have been shown to reduce risk of CVD and may also have the potential to prevent age related cognitive decline. Soya foods have gained particular attention due to their beneficial nutrition profile often associated with improved cognitive performance. Soya foods are the main dietary source of the phytoestrogens - isoflavones as well as providing cis-poly-unsaturated fatty acids (PUFA), and high-quality plant proteins.

This Alpro Foundation grant aimed to measure the effect of longer-term soya nut consumption on cerebral blood flow (CBF), a marker of cerebrovascular function as well as cognitive performance in older adults.

This was a randomized, controlled, single blinded crossover study involving 23 healthy men and women between the ages of 60 and 70 years. Participants took part in a 16-week dietary intervention where they consumed 67g of soya nuts daily (equivalent to 25g protein and 174mg isoflavones) and a 16-week control diet. During the study, participants were encouraged to eat according to the 2015 Dutch food-based dietary guidelines.

At baseline and follow up points during the study, researchers measured:

Statistical analysis using a linear mixed model was performed to determine the impacts of the dietary intervention on participants’ cognitive function.

Serum isoflavone concentrations increased during the soya nut intervention indicating good compliance with the diet. Overall, soya nuts were well tolerated by participants and no adverse effects were reported.

There were several key observations following the intervention:

The research demonstrates the potential for soya nuts to improve cognitive function in older adults, although it is unknown whether this is a result of soya isoflavones, plant-based protein or cis-PUFA. 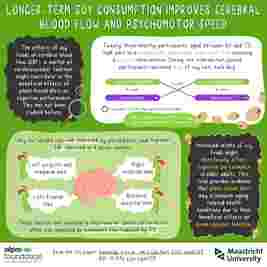 In summary, longer-term soya nut consumption has been shown to improve cerebral blood flow and therefore may improve cerebrovascular function of older adults, specifically in the area of psychomotor speed.

Soya and health - an overview

Infographic illustrating the findings of research into the effect of longer-term soya nut consumption on cerebral blood flow (CBF).