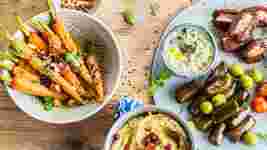 The importance of the gut microbiota in human health has become increasingly evident, although the understanding of what constitutes “healthy microbiota” remains unclear. Numerous studies have shown that diet is one of the most important lifestyle factors that influences the composition of human gut microbiota.

This in-depth and fully referenced scientific update, by Dr Véronique Braesco, Dr Petra Louis and Dr Ian Rowland, reviews the latest available evidence regarding the effects of plant-based diets on the composition and metabolism of gut microbiota.

Key learnings from the report:

Although the precise make-up of the optimal diet for gut microbiota has yet to be identified, a balanced diet composed of a variety of plant foods appears to have the greatest potential to positively modify gut microbiota composition and metabolism through increased intake of fibre and polyphenols and reduced intake of animal products.

3 experts discuss the findings of this report

This in-depth and fully referenced scientific update by Dr Véronique Braesco reviews the latest available evidence regarding the effects of plant-based diets on the composition and metabolism of gut microbiota.