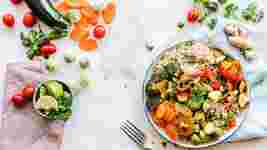 Members of the EAT Lancet commission and UK diet experts have come together to expand the data available for the environmental impact of foods, by producing an algorithm which provides the impact of composite foods in the UK and Ireland.

Building on the internationally renowned Poore and Nemecek database which focused mainly on food commodities, this study provides the environmental impact of foods most commonly found in retail supermarkets and most commonly consumed by individuals in the UK and Ireland. Most of these foods are composite foods, made up of more than a couple of ingredients.

To calculate the environmental impact of composite foods, it is necessary to first identify the impact of each individual ingredient based on its volume using the established Poore and Nemecek data, and then summing up the values to provide the total impact of the food. As most recipes of composite foods is proprietary, the exact volume of each ingredient has to be estimated. The group developed an algorithm to estimate the weight of individual ingredients based on current ingredient labelling requirements and aligning with equivalent recipes of just over 1,500 foods whose full recipes were made available.

Algorithm found to have reasonable accuracy

The algorithm’s accuracy was assessed by using the 1,547 foods whose full recipes were known and was found to have reasonable accuracy.

The data is split by retail category / aisle placement. The highest impact scores were meat, cheese and some ready meals, whilst the lowest environmental scores were for beverages as the main volume of ingredient was water.

The lower the environmental score for foods, the better the nutritional quality as assessed by Nutriscore. This was not the case for beverages, as the main volume of sweetened beverages is of course water.

The algorithm scores for environmental impact and Nutriscore are based on 100g volume of foods or drinks. This need to be taken into consideration when interpreting the data. Some foods such nuts and breakfast cereals are often consumed at around 30g servings – hence the environmental score would be significantly lower than calculating per 100g. Similarly for tea and coffee, which are shown to have a higher environmental impact per 100g than sweetened beverages. However, tea and coffee is consumed in quantities less than 5g. Conversely, beverages are often consumed at volumes 2.5 to 3.3 times greater than the current score provided for 100g of product. Hence the scores provided in this publication at per 100g could be significantly higher or lower depending on usual serving size. The authors have also calculated per servings and this data is available in the supplementary material.

A summary of alignment and misalignment with Nutriscore 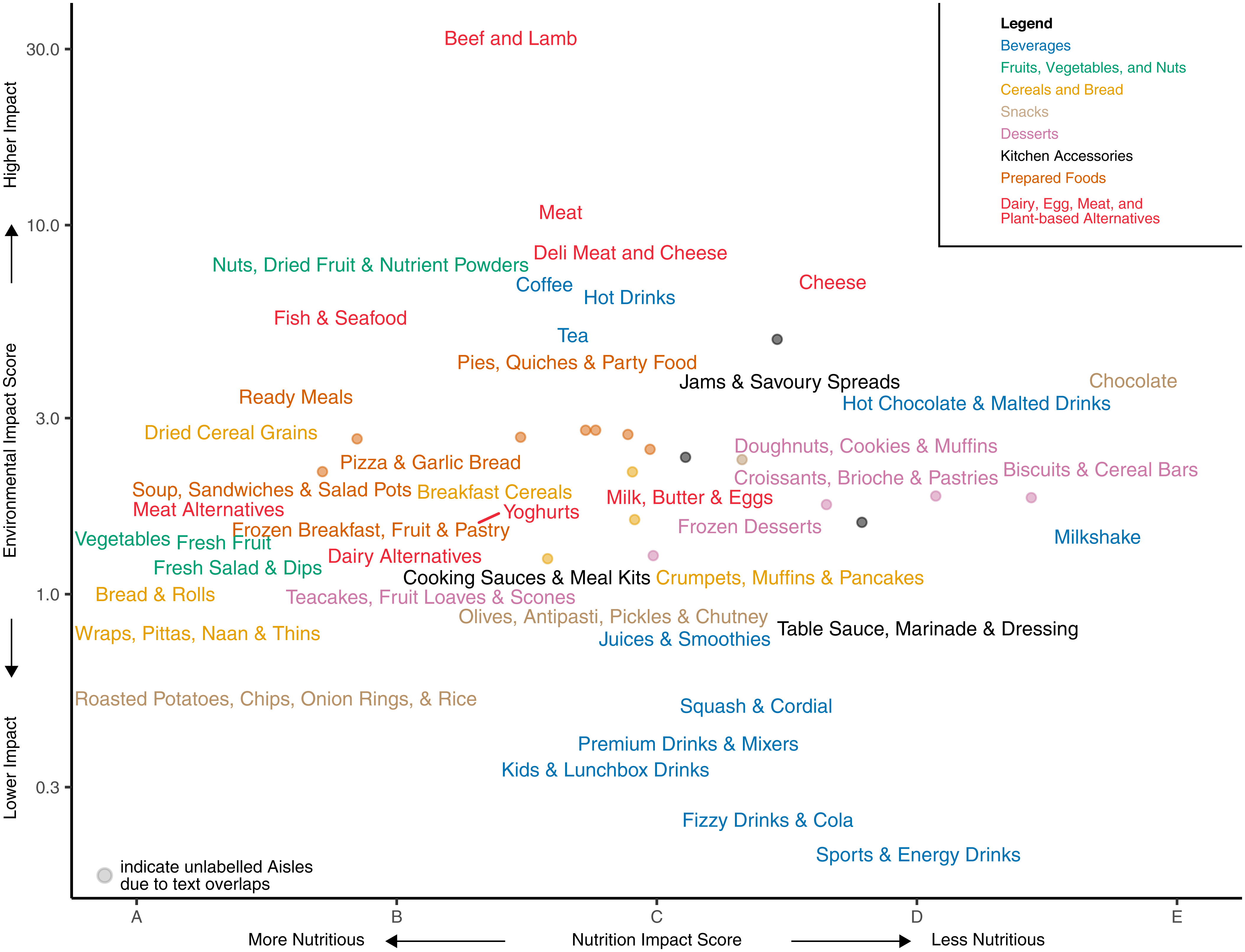 Win for Nutriscore but Lose for environmental score

Lose for Nutriscore but win for environmental score

The team compared the scores between food categories that could be swapped due to their similarity. This was seen as important with regard to behaviour change, as people would be more likely to swap like with like rather than out of category. For example, switching meat for beans and pulses, would produce the biggest environmental reduction, however, consumers are more likely to switch to a plant-based meat alternative option such as soya mince or mycoprotein. The group even found switching the type of meat source in a sausage would produce significant environmental reductions: beef and lamb sausages having a greater environmental score compared to pork sausages which have a greater impact compared to chicken or turkey sausages which have a greater impact than plant-based alternatives.

This study has expanded our knowledge of the environmental impact of composite foods. Additionally, the algorithm score of 0-100, would be an easier to understand concept for most consumers rather than comparing actual environmental data on different foods. Although, based on UK and Ireland data, there is no reason why the algorithm cannot be adapted for use across different countries who use similar food labelling criteria.

Most importantly, this study demonstrates that, in the main, no trade-off is need when choosing foods that are good for the environment and health. Drinks and a handful of food items, may need special consideration where the nutrition quality does not align with the environmental footprint e.g. sweetened beverages and foods consumed at significantly lower serving sizes than 100g.